Last week, we decided to have dinner in Marco Pierre White Restaurant Bar and Grill in the Jurys Inn, Hinckley Island (formerly Hinckley Island Hotel) It was a belated Mothers’ Day Dinner.

I have stayed in the Hotel several times and the rooms were good and spacious and the bed was very comfortable. I had attended some conferences there too. Now I go to the gym once a week.

We decided to try out the Restaurant as I have not been there before since Marco Pierre White took over. We booked a table for 4.

On arrival, the waiters and waitresses were attentive and we were shown to our table immediately. The restaurant was busy with quite a fair bit of diners on a week day.

The ambiance was quiet and not too dimly lit. However, the background music was too loud.

All of us had 2 courses and only 3 of us ordered desserts.

The menu was simple. There were starters and platters to share. As it is a steak house and grill, the menu focuses on the steak and grills and there was a good selection of seafood as well.

For starters, we ordered:

Fritto Misto of Calamari and Shrimps in sauce tartare.

The Fritto Misto was nice and crispy and the tartar sauce was a nice accompaniment. Daughter number two enjoyed it very much.

The kipper was a bit bland according to daughter number one. But she polished it off anyway, asking her dad to give her the extra toast from his starter. She ordered it as it was named after the famous chef from North America who ate all sorts of things all over the world.

My rillettes of duck was covered with a layer of duck fat, so I just removed them before eating. I know this is not the way to eat it but I did not want to add in too much calories. It was easy to remove as it had set. The duck was actually very tasty, with the prunes giving it a sweet and slightly tangy taste. It complements the dish well. It was again served with toasted sourdough.

The boiled ham in jelly was delicious and the piccalilli complemented the rich ham. The food was simple but really tasty.

For the mains, daughter number 1 ordered the Roast rump of lamb a la Dijonnaise, green beans, potatoes dauphinoise, roasting juices. According to her, there were some grisks or membrane on the lamb and the whole dish was a bit under season. She was not very happy with her order.

Daughter number 2 had Cheeseburger, or rather the Great American bacon and cheeseburger, smoked bacon, BBQ sauce, brioche bun, pommes frites.  The serving was huge. the burger itself was high, so much so that one cannot bite it. The presentation was good, with the burger and fries served in a wooden plate.

Hubby had the 10 oz Sir loin steak, served with a grilled tomato, watercress, onion rings and triple cooked chips. The steak was done medium -rare, just as he likes it.  The chip were really crispy and nicely fried, the onion rings was just what onion rings should taste. light, good colour and crispy.

I had the Macaroni of lobster with fresh tarragon.

The lobster was really simple in taste. It was sweet as it was cooked in the lobster broth. There were tender pieces of lobster. Overall the dish is simple and heavenly. The portions were not too big. But after a while I can feel the pasta expanding!

The Cambridge burnt cream was actually a crème brulee. It came with a thick burnt sugar all right and the brulee was smooth. It’s okay, but nothing fantastic. The cheesecake was ok and the fresh passion fruit sauce was good and fresh as described. It had a lovely fragrance.

Sorry, I did not take any photos as I am not quite a sweets person so it completely left my mind to take photos,

The bill came up to over £220, bearing in mind that I do not drink alcohol and neither do the girls. It is not too steep in view that it is a well known chef’s restaurant. Furthermore, the food is tasty. I will definitely go there again. What food can one get @ Prana Cafe? 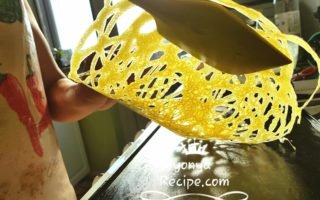 How to Make Roti Jala